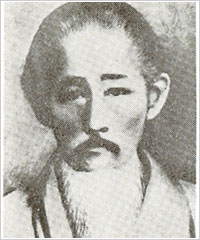 Higaonna sensei was born in 1853 in Naha, Okinawa. He is best known as one of the founders of Naha-te (那覇手, Okinawan: Naafa-dii), a precursor of modern karate. As a child, he practiced the indigenous Okinawan martial art known only as “Te” (手, Okinawan: Tii), and was known as an exceptionally talented student. While training in Okinawa, he became deeply interested in Chinese martial arts as well, and traveled to Fujian Province, China to learn various forms of Kenpo (拳法, Mandarin: quánfǎ) as a young man.
After returning to Japan, his skills earned him the name "Karate Higaonna," and many young people became interested in training with him. One of these students was Goju Ryu founder Miyagi Chojun, who began studying under Higaonna-sensei at the age of fourteen. Higaonna-sensei’s instruction was rigorous, and focused around the practice of the Sanchin kata (三戦). The Sanchin kata remains the foundation of Goju-ryu Karate to this day, and must be practiced with great discipline. An important axiom of the practice is: begin with Sanchin and end with Sanchin.
Higaonna-sensei passed away in 1915 at the age of 63. 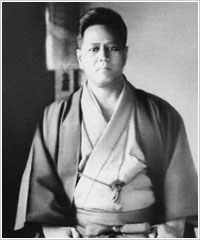 Miyagi-sensei was the founder of Goju Ryu Karate-do. He was born on April 25, 1888. In Okinawa at that time, the family established by the first son, or the main family (本家, honke), took responsibility for maintaining the continuity of the family lineage, while the families of other sons formed various branch families (分家, bunke). Miyagi-sensei was born the eldest son of a Miyagi branch family in Naha, Okinawa, however, Chohatsu Miyagi of the main family adopted Miyagi-sensei in 1897, making him the head of the 11th generation of the Miyagi main family. From September 1902 to 1915, Miyagi-sensei studied under Kanryo Higaonna; like his teacher, he also travelled to Fuzhou, Fujian province, China to study martial arts from 1915 to 1917.

Also like Higaonna-sensei, Miyagi-sensei’s instruction was extremely rigorous. New students were not allowed to study Kata immediately, and he evaluated a student’s worthiness to train as much on the basis of their moral character as on their technical skill. He also did not hesitate to dismiss students whom he found unworthy of practicing Karate-do.

Miyagi-sensei had a deep knowledge of the Chinese classics, and manifested many of their virtues: for example, he learned of Higaonna-sensei’s death while he was training in China, and briefly returned to Japan to oversee the funeral arrangements. He also had deep knowledge of geography and history, as well as of Chinese medicine and human anatomy. He integrated this personal study with his years of experience training in Naha-te and other martial arts. The result was Goju Ryu Karate-do: a systematic approach for developing physical health, mental strength, and moral character. He passed away on October 8, 1953 at the age of 65. 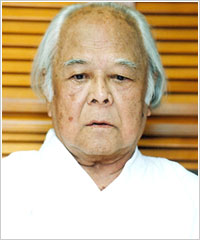 Miyagi Takashi-sensei was born on August 28, 1919 in Higashi-machi, Naha, Okinawa, and was the eldest son of Miyagi Chojun. Through his father, Takashi-sensei had many opportunities to learn the techniques and practices of the high-ranking Karate masters in Okinawa at that time. Miyagi Chojun-sensei also initiated Takashi-sensei into the oral tradition of Okinawan martial arts including the rich history of the development of Karate-do within Okinawa, and of the martial arts masters who came to Okinawa from abroad. Like most Japanese men of his generation, Takashi-sensei served during the Pacific war; he retired as an army junior lieutenant in the Philippines after the war ended.

Many of the communities on Okinawa were decimated during the war; as a result many Okinawans were forced to relocate to parts of the Japanese mainland. In addition, the United States military governed the Ryukyu Islands, including Okinawa, from 1950 to 1972. Takashi-sensei relocated to Tokyo after the war; when his father died in Okinawa in October 1953, he was unable to attend the funeral, however, on the third anniversary of Miyagi Chojun-sensei’s death in October 1955, Takashi-sensei founded the Komeikan (講明館) Goju-ryu Karate-do association. The Chinese character 「講」means “teaching,” while the character 「明」means to “to see clearly”; Takashi-sensei founded his dojo with the aim of passing on the correct, uncompromised interpretation of his father’s Karate to the next generation.

Takashi-sensei opened the first Komeikan dojo in Toshima Ward, Tokyo. Much of Tokyo City had been destroyed during the war, and all of Japan remained under US military occupation; life was difficult then. However, Takashi-sensei worked hard to expand his Komeikan association; he later opened another dojo, the Komeikan Soke Dojo, in Kunitachi, Tokyo, where he began to accept foreign students as well as Japanese.

Takashi-sensei faithfully continued his father’s strict approach to Karate training; his goal was to pass on Miyagi Chojun-sensei’s unique synthesis of Okinawan and Chinese-informed martial arts, and modern, systematic training methods. He also taught Karate as a method for developing the moral character of his students.

Takashi-sensei appeared in a Japan Broadcasting Organization (NHK) documentary about the construction of the Japan Budokan entitled "A Record of the Contemporary: Reconstructing the Spirit" (現代の記録・精神復興); he performed the Seipai (セイパイ) Kata. Takashi-sensei also published two introductory books on Karate: "How to Enjoy Karate-do" (空手道の楽しみ方) and "Orthodox Goju-ryu Karate-do" (正統空手道入門) (both volumes are out of print). He also served as chairman of the Karate-do Goju Federation (空手道剛柔連盟). Takashi-sensei passed away on October 20, 2008 at the age of 89. 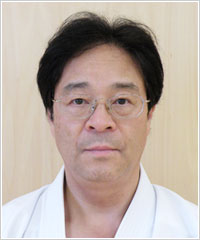 Miyagi Toru-sensei was born in Shimoochiai, Shinjuku, Tokyo on August 11, 1947; he is the eldest son of Miyagi Takashi-sensei and the third generation lineage holder of Goju Ryu Karate-do. Toru-sensei received strict instruction in Karate-do from his father: his early training was grounded in the Sanchin (サンチン) and Tensho (転掌) kata, as well as the rigorous practice of yobi undo (予備運動): a series of preparatory exercises unique to Goju Ryu designed to condition the body for Karate training. He also trained in the many techniques for close-combat fighting represented in each of the Goju Ryu kata.

He graduated from the School of Political Science and Economics at the prestigious Waseda University. He then worked as a reporter for Nikkei Inc., a major Japanese business-news organization. In September 1995, he started formally teaching Karate-do for the purpose of helping young people to better themselves for the good of society. Toru-sensei then began teaching alongside his father at the newly opened Komeikan Dojo in Ome, Tokyo. After his father’s death, Toru-sensei became the director of the Komeikan and the Chairman of the Goju Karate-do Federation. 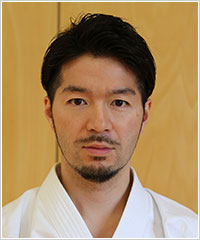 Miyagi Manabu-sensei was born on May 16, 1980 in Omiya, in Saitama prefecture; he is the second son of Miyagi Toru-sensei, the third generation lineage holder of Goju Ryu Karate-do.
Since childhood, Manabu-sensei received instruction from his father and grandfather, Miyagi Takashi-sensei, in the practice of Yobi Undo and the precise execution of each of the Goju Ryu Kata.

Manabu-sensei graduated from Toho High School in Kunitachi, Tokyo, and went on to study in the Department of Banking and Corporate Finance at the selective Chuo University.

Since 2006, Manabu-sensei began conducting public Karate-do lessons at Iseikai Tobu Nursery School in Saitama. In 2008 he began assisting his father, Miyagi Toru-sensei, in the administration of the Komeikan organization’s headquarters in Ome, Tokyo. He currently serves as the Deputy Director of the Komeikan.
In October 2013, Manabu-sensei opened a new Komeikan dojo in Kasukabe, Saitama. Like has father, Manabu-sensei is especially interested in teaching Karate-do for the purpose of helping young people to better themselves for the good of society.